Stepson of the Blues: A Chicago Song of Survival 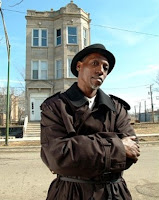 Stepson of the Blues, the autobiography of singer/drummer Larry Hill Taylor, co-authored by Bonni McKeown, was published in 2010 by Peaceful Patriot Press. It was issued in a limited edition and went out of print at the end of 2014.

Blues, the powerful root of America’s popular music, is in danger of extinction. By telling his life story, singer and drummer Larry Hill Taylor shows you why. Larry grows up during the 1960s in the historic Lawndale neighborhood on Chicago’s rough and soulful West Side, with almost-famous parents: singer Vera Taylor, his mother; and guitarist Eddie Taylor, his stepfather. He survives family abuse and conflict, gangs, prison, drugs, and the streets. He spends 30 years on stage learning the blues from his musical elders as they change people’s hard times to good times.
Now Larry wants to lead his own band and make a better living for his family, but finds himself slogging through a cesspool of greedy, ugly, race-ridden dynamics among musicians and promoters.

Trying to speak out, Larry finds his career shut down. But he won’t shut up!  Either singing, or talking about his vision for the blues.   His goal: open the door so he and other upcoming African American musicians can take the lead and earn their just due. Once their energy is freed, the blues can take its true place in healing a wounded world.

More about Larry at http://www.larrytaylorchicagoblues.com

Tom Bennett: what would he think about these wars? 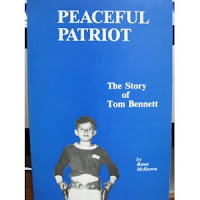 In 1980, 11 years after a young Army medic from Morgantown, WV, was killed in Vietnam, his story, Peaceful Patriot, was published by Mountain State Press in Charleston, WV.

Like so many of us reaching adulthood in the 1960s, Thomas W. Bennett was not sure what he wanted to do with his life. He could have been a congressman, a counselor, a doctor, a minister--even a musician. But growing up in a middle class family, he felt it was fundamentally unfair that poor and working class people were more susceptible to being sent to war.  When his draft notice came, he applied, and was accepted by the draft board, as a “conscientious objector willing to serve.”

I met Tom when he was a student leader during my freshman year as a journalism student at West Virginia University. He was good at making friends everywhere, and the Army was no exception. He was always scrounging for supplies so that nobody’s cut went unbandaged  and no illness went untreated. Toil Smith III from Kansas City remembered him for helping to rig up a radio receiver so he and his friends could hear some jazz music.

I had a mad crush on Tom and took to writing things about him. He knew he could count on me to write his biography.  He lived a full life at 21 years.  He died trying to save somebody in a battle on Chu Pa mountain in Pleiku, Vietnam, Feb. 11, 1969.

Tom’s stepfather Kermit Gray fought in World War II. Tom believed in American freedom and democracy, and was always trying to inform and include more people in the workings of government.  Like Martin Luther King Jr., he did not believe we should be fighting in Vietnam. I don’t believe we should be fighting these wars of today. Who are we to lord it over other countries when our own needs so much work?

Tom’s uncle, Robert Miller, and I don’t always agree on public affairs. But Tom would never want us to fight with each other! Uncle Bob has put together an informative tribute on-line, noting that people in the military respected Tom so much that several facilities were named after him.
http://1-14th.com/MOH_Bennett.html

Rest in Peace, Tom, as we continue to struggle with the issues your life pointed out to us.

Bonni
I travel (usually on the Amtrak Cardinal train!) between Chicago and my home state of West Virginia, playing blues piano and talking about whatever I'm writing about. My hope is to grow spiritually (I'm a Quaker)and learn to cooperatively address the horrendous issues on this planet. I've published my major work through my own Peaceful Patriot Press: the biographies Peaceful Patriot:The Story of Tom Bennett and Stepson of the Blues: A Chicago Song of Survival www.stepsonoftheblues.com